London-based Waymap wants to help guide visually impaired people to navigate their surroundings, and it’s starting with public transit. The company just concluded a closed two-week trial of its navigation app at three stops within Washington, D.C.’s Metro, and hopes to begin a public trial at 25 Metro stations and 1,000 bus stops by September, according to Waymap.

“What we learned from our trial is that this is so important to blind people because when you lose your sight, you lose the freedom to explore,” Waymap’s CEO and founder Tom Pey, who founded the company after losing his own sight at 39 years old, told TechCrunch.

“The regular blind person uses about 2.5 routes regularly. And that means they get to go to the grocery store and to the pharmacy. And the reason for that is the amount of information you have to remember when you lose your sight, and to pack all that into your head, is quite difficult as well as trying to keep yourself safe using your primary mobility. So what we do is we replace the human memory and give the person access to infinite memory in terms of routing, and that then allows them, with their mobility skills, to go anywhere.”

Going anywhere is, of course, the long-term goal as the company scales up, but for the short-term, Waymap is starting with public transportation before branching out to places like museums, hotels, hospitals or other public buildings. The company has trialed its tech around the world, but Washington, D.C. will be the first entire city across which the app is deployed.

The Waymap app provides free audio step-by-step directions to users, directing them within 3 feet of accuracy. And Waymap really means it when it says “step-by-step” because the startup doesn’t use GPS to track users; it taps into a smartphone’s Inertial Measurement Unit sensors — magnetometers, accelerometers and barometers — to get data like how fast someone walks, what their gait is like, if they’re going up or down stairs. This data is then fed into Waymap’s own algorithm, which relies on Bayesian statistics to spray out 5,000 possible positions where a user might be based on their next step and work out where, based on probability, they likely are. That algorithm is run in conjunction with Waymap’s “map matching” algorithm, in order to provide exact instructions to users.

For the purpose of the most recent trial in D.C., Waymap had its 15 visually impaired users, seven sighted users and three orientation and mobility instructors affix their phones to holsters on their belts. 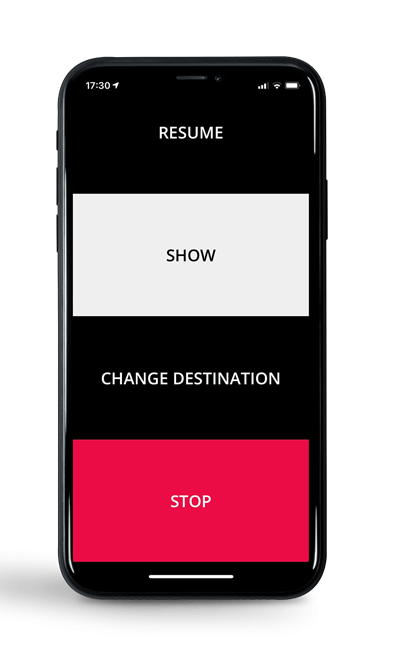 “Our algorithm is recording the kinetic energy that you are using to walk, and that allows us to understand the approximate speed at which you walk and the probable step length,” said Pey, noting that the app first fixes a user’s location using GPS or even a “non-location” like the user’s front door, before then only relying on sensors to determine where the user is in relation to their environment.

“Once we know the speed or step length, and we know where you are, the algorithm works out with 99.999% certainty where your next step is going to be,” Pey continued. “If you change speed, then we detect that because that energy goes through your hip. So therefore, we remain 99.999% certain where you are.”

Getting an accurate location also relies on mapping the environment. As Waymap scales up, it will take maps from local transit authorities or open street maps when mapping exteriors of transit stops and stations. However, for its D.C. trial, Waymap used lidar scans to map the stations, as well as 360 degree video. The scans provided the basic layout of the stations, and the videos helped to identify obstacles or points of interest — like pillars, garbage cans or seating areas — for disabled people.

In the future, when use of Waymap gets to critical mass, Pey wants to enlist sighted people to use the app while they’re traveling so they can effectively donate to the startup data about their steps and the way they maneuver around positions. This will help Waymap’s algorithms learn through continuously updated maps and routing information.

Waymap recently closed out a $4.9 million (£4 million) pre-Series A, and plans to raise its Series A next year. The funds will be used to continue developing the technology across all areas of localization and mapping, as well as to build out the startup’s business development team in the U.S., according to Pey.

Pey expects Waymap, which is already generating profits from transit authorities and cities, to be profitable shortly after its next raise.

Are carbon offsets bullshit? A renowned climate expert weighs in.

Instagram chases TikTok with a new full-screen feed, changes to photos and navigation to come