Report claims Amazon collects over a third of seller revenue, bringing in $121B in 2021

A new study claims that Amazon makes far more from fees on its Marketplace platform than even the cash cow known as AWS. The report says that Amazon’s fees for participating effectively on its store have grown to the point where sellers now give the company about 34% of their earnings — and this has lately become Amazon’s primary revenue stream. The company disputes the report’s findings.

The report, “Amazon’s Toll Road,” by the Institute for Local Self-Reliance, makes two primary claims. First, the ILSR’s researchers say that in 2021 Amazon will bring in some $121 billion from sellers in the form of fees and advertising payments, about 34% of those sellers’ total revenue. That’s twice the estimated $60 billion from 2019, which at the time was 31% of seller revenue, according to the report.

Founder Jeff Bezos himself attempted to counter this narrative when he told Congress that the increasing amount of money going from sellers to Amazon is something of an optical illusion, due to more of them choosing to pay for add-on services like better placement on keyword searches and using Amazon’s own shipping and warehouse infrastructure.

In a statement to TechCrunch, Amazon called the ILSR report “inaccurate,” saying it “conflates Amazon’s selling fees with our optional add-on services” and that its selling fees are competitive with other online retailers — and certainly the report does combine those numbers.

But as its author, Stacy Mitchell, points out, the add-ons have gone from optional to must-have as Amazon has given advantage after advantage to sellers that use them. Reports over the last few years show that the number of ads and sponsored listings on common product searches have increased dramatically. And Amazon gives a score bonus to sellers using the “Fulfilled By Amazon” service, which contributes strongly to whether a product gets certain coveted spots in the listings. And this is without considering the shady business of duplicating successful products.

Amazon did not address the claim that sellers are spending 4-5 times as much on ads and placement today as they did in 2016, contributing to the huge increase in income. The company merely said there is a range of ad types and processes, and that it’s “a great way for sellers to help increase the visibility of their products.” It denied that it favors FBA users in search results, though as the link above shows, it seems to do so by indirect means.

The other claim made by the report is that Amazon is using creative accounting to mask the enormous revenues generated by seller fees, grouping the huge profits of the Marketplace division with enormous losses incurred in building out their shipping infrastructure. Sure, they’re related — but it’s hardly forthcoming to present an aggregate of two wildly different numbers and claim it represents the business accurately. This is not a new allegation, but Mitchell puts specific numbers on it for 2020, making it more than a general idea. 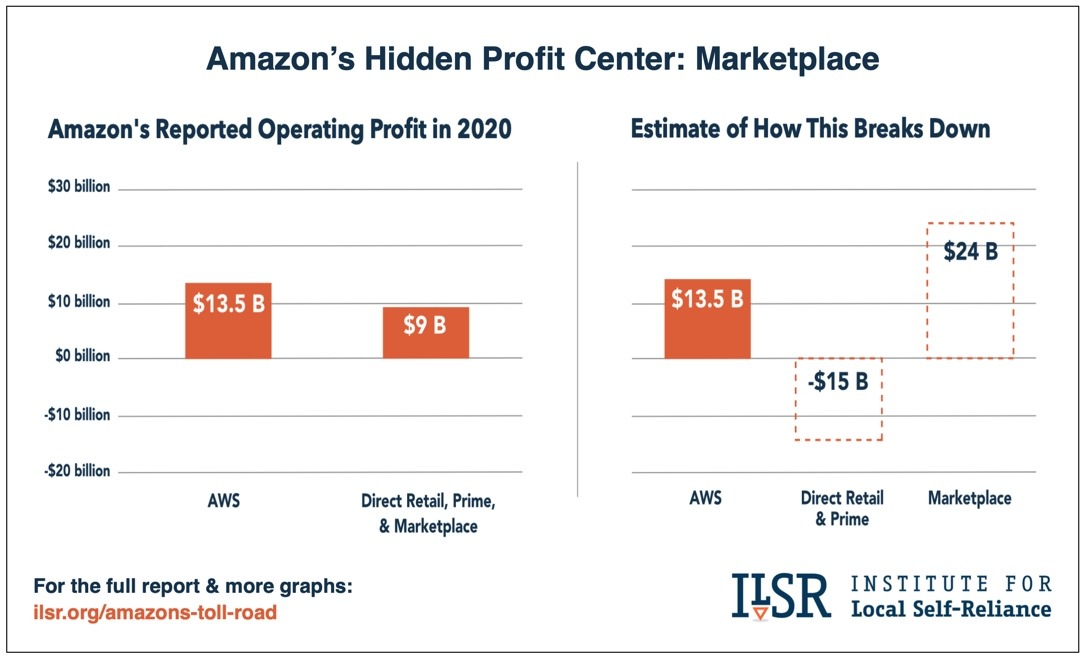 “We conclude that seller fees likely generate more profit than AWS. This contradicts conventional wisdom about the company; news stories commonly describe AWS as the source of most of Amazon’s earnings,” writes Mitchell in the summary. “Drawing on analysts’ estimates of the margins Amazon likely earns on seller advertising and other seller fees, we find that Marketplace may have generated operating profits of $24 billion in 2020 — significantly more than the $13.5 billion in profit that Amazon reported for AWS. AWS has long been seen as Amazon’s cash cow. But this report finds that the tech giant has a second cash cow, which it keeps quietly out of view.”

Amazon told me that it “cannot speculate” on 2021 revenue numbers during the year, but did not respond to a follow-up question asking whether the previous years’ numbers in the ILSR report were accurate.

Some of these practices are under scrutiny by various government powers, including an FTC led by perhaps now the world’s most famous questioner of Amazon’s business practices, Lina Khan. The ILSR report is merely informative and Amazon can wave it away, but if an FTC task force is looking into similar questions and drawing similar conclusions, the company may have reason to start sweating.