A new Pinterest feature will allow users to virtually try on products, starting with lipstick, before they shop from retailers like Estée Lauder, Sephora, bareMinerals, Neutrogena, NYX Professional Makeup, YSL Beauté, Lancôme and Urban Decay from L’Oréal. To use the new feature, Pinners will first open Pinterest’s smart camera, “Lens,” while in Search, then click “Try it” to explore the different lipstick shades available. To shop the products, you just swipe up. 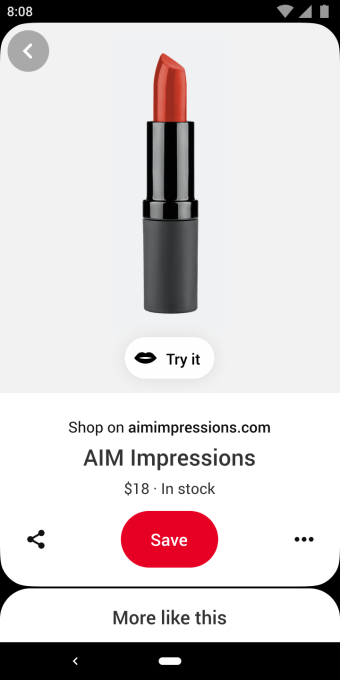 Pinterest says that it won’t alter your photo using skin smoothing or other techniques, so you can be sure of what the lipstick looks like on the real you. In addition, the feature has been integrated with Pinterest’s existing skin tone range feature, so users can shop for similar lip shades on skin tones that match their own.

While makeup and beauty is a topic that’s often featured on platforms like Instagram and YouTube, Pinterest is also a top destination for those who are shopping for beauty and personal care items. According to Pinterest, more than 52 million people search and engage with beauty content on its platform in the U.S. every month.

In addition, a 2018 study from GfK found that 87% of beauty and personal care Pinners come to Pinterest when actively considering what to purchase, the company says. Pinners also regularly turn to the platform to seek out particular lip styles, whether that’s something more traditional like “glossy lips” or “pink lips,” or trendier styles like “ombre lip” or “black lipstick,” for example — all of which were top lip searches in 2019.

The company says it started “Try on” with lipstick because it’s one of the most searched beauty-related items on the site. We should point out, it’s also easier to develop technology to virtually try on lipstick than some other makeup items, though.

Pinterest says lipstick will be followed by more try on-enabled beauty products and categories in the future. 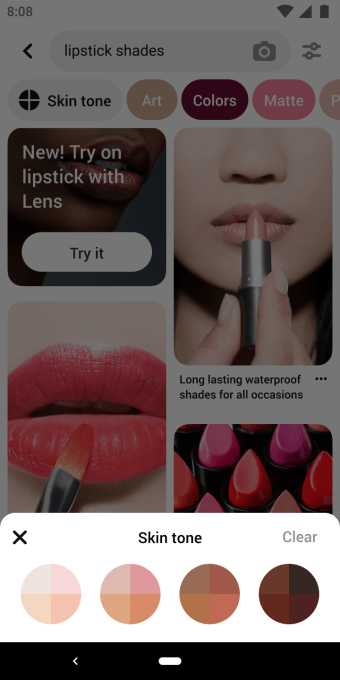 Pinterest is not the first to launch a virtual makeup experience. YouTube last year debuted an AR Try-On experience that allowed viewers to virtually try on makeup (also initially lipstick) while watching video reviews on its site. But that feature isn’t broadly available across videos as it was offered as an option for brands working with YouTube’s FameBit division as a way to market their makeup via YouTube influencers, not a core YouTube feature.

Other virtual makeup experiences include AR beauty apps like YouCam Makeup, Sephora’s Virtual Artist and Ulta’s GLAMLab; as well as selfie editors like FaceApp, Perfect365, Facetune and others. L’Oréal also offers Live Try-On on its website, and partnered with Facebook last year to bring virtual makeup to the site. In addition, Target’s online Beauty Studio offers virtual makeup across a number of brands and products. 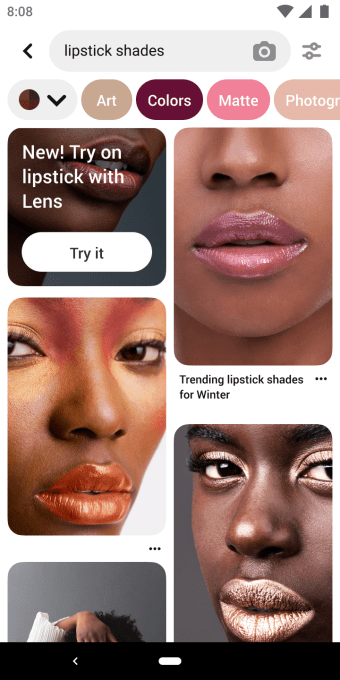 In Pinterest’s case, however, the idea is to capture shoppers’ attention before they know what brand or shade they want to buy, then let them experiment with different shades until they find the right fit. The larger goal is to attract shoppers to Pinterest before they’re ready to type in a brand name on Amazon or Google, so they’ll instead find their way directly to the retailer’s site through Pinterest instead.

However, Try on is not an advertising product for Pinterest nor is there a revenue share on sales it inspires. Instead, Pinterest will continue to monetize through advertising. That said, the new feature is meant to draw in users who are ready to shop. And this, in turn, drives engagement for those brands investing in ads on Pinterest.

Participating brands may receive insights on the performance of their shopping features, like Try on. But they’re not collecting personal data. We understand the information about engagement and conversion is used in aggregate to make relevant recommendations to Pinterest users. (And users can also disable personalization from their Settings, if they choose.)

The launch of Try on arrives as Google finds itself inching further into Pinterest’s territory with recent updates to its competitive bookmarking tool called “Collections,” as well as with its new Shopping vertical, which includes its own smart camera, Google Lens.

The new Try on feature is launching today on Pinterest in the U.S., on both iOS and Android mobile. The feature will later expand internationally as well as to more platforms.