With the economic turbulence, recruiting is slowing down. Layoffs.fyi, a crowdsourced tech startup layoffs tracker, shows that 60 companies executed layoffs within the past month or so, with over 16,000 employees laid off. It’s not limited to tech. According to a recent Gartner survey, one in three HR executives across all industries said their organizations had slowed hiring in response to the volatile market.

But hiring hasn’t stopped completely. Instead, HR departments are being asked to accomplish more with fewer people, completing strategic work while balancing tasks like scheduling interviews, gathering feedback and moving processes forward. In lieu of expanded hiring and recruiting teams, Lydia Han makes the case that software can provide assistance — Han is the co-founder and CEO of ModernLoop, a platform built around a scheduling engine for remote interviews.

“With the shift to remote work, recruiting teams found themselves in a new world of interview scheduling,” Han told TechCrunch in an email interview. “[Now,] even though headcount is slowing down, key hires are still a top priority and engineering hiring remains as difficult as ever … [But] it’s abundantly clear to me that when products work together seamlessly, and when technology can reduce the steps to get something done, people can achieve significantly more.”

Han co-launched ModernLoop in 2020 alongside Christopher Triolo, now ModernLoop’s CTO. After stints at Salesforce and Meta, and while working as a product manager at Slack, Han helped to build Slack’s integrations with Zoom and Google Calendar. At Meta, Triolo spearheaded Facebook’s charitable donations feature, which allows people and charities to launch fundraising campaigns.

Han says she was inspired to start ModernLoop after joining Brex, where her sister worked as a technical recruiter.

“As her roommate for the last six years, I saw that, while she was an incredibly strategic and thoughtful recruiter, so much of her day was spent doing manual, repetitive tasks,” Han said. “I wanted to take my prior experience of building productivity hacks into the tools we rely on every day and apply it to one of the most process-driven parts of a business: recruiting.” 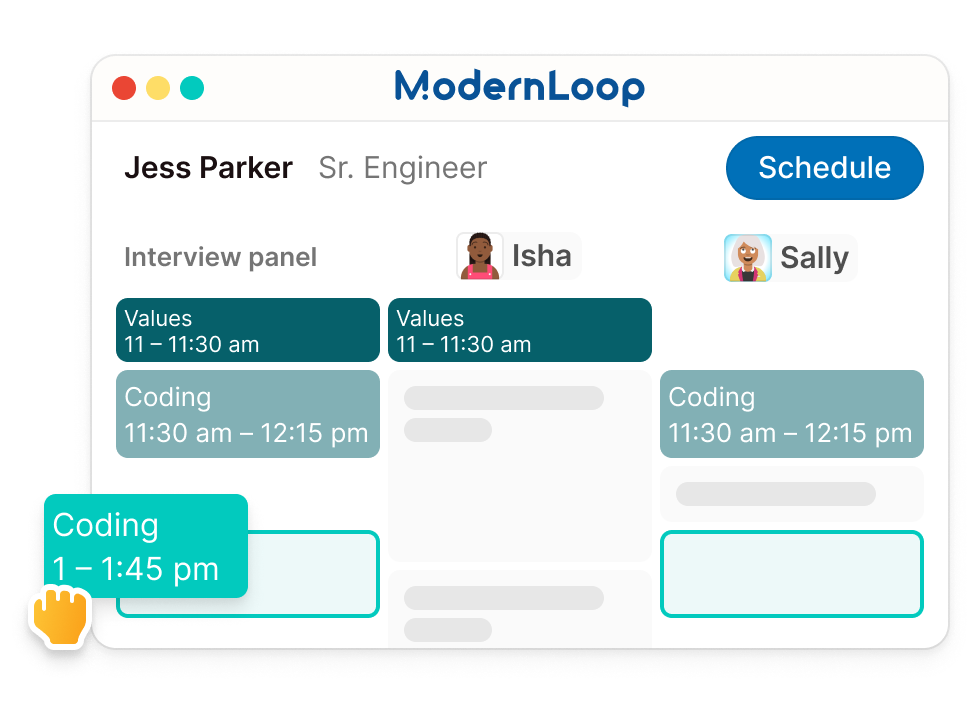 To that end, ModernLoop offers tools designed to help HR teams book interviews “efficiently” across multiple time zones. The service’s scheduling algorithm attempts to find the best times, sifting through calendar events to figure out which holds are for other tasks as opposed to confirmed interviews with candidates. ModernLoop can also detect and tag calendar events that are moveable, Han says, such as internal one-on-ones and meetings with external attendees.

Beyond this, ModernLoop automatically sends email invites to interviewees with LinkedIn profiles of interviewers, calendar events and video meeting links. The platform monitors interview calendar event acceptance across candidates and interviewers, tracking the HR team’s interview load and recommending training modules where they might be helpful.

“While there are a lot of great tools focused on candidate tracking, many of which we integrate with, they fall short when it comes to the operational components of recruiting,” Han said, referring to startups like GoodTime, Distill and OnboardIQ. “Our biggest competitor is the manual systems that recruiters have created for themselves through Google Sheets and Excel. These systems are time-consuming and slow down the entire recruiting process … Companies are using ModernLoop as a way to help keep the business afloat and still make the strategic backfills and new hires needed in order to run their business since the product can scale recruiting up and down, instantly.”

ModernLoop claims to work with “dozens” of customers, including VSCO, Chainalysis, Ramp and Han’s former employer, Brex. Han didn’t disclose the financials but said that ModernLoop’s annual recurring revenue has been growing 500% year over year.

The growth seemingly won over investors — Accel led a $9 million Series A round in ModernLoop that brings the startup’s total raised to $12.3 million. Notably, Slack CEO Stewart Butterfield and Zoom CEO Eric Yuan participated alongside Web Investment and Quiet Capital.

ModernLoop is perhaps benefiting from the continued boom in HR tech; investors remain bullish on sector even as the “Great Resignation” begins to slow. In 2021, venture investors funneled more than $12.3 billion into HR tech startups, roughly 3.6 times the amount invested in 2020, according to PitchBook data.

When reached for comment, Accel partner Amit Kumar said in a statement: “Talent professionals at fast-growing companies are increasingly relying on ModernLoop as the backbone of their interviewing and recruiting efforts. Their platform helps talent teams remain agile and efficient despite changing objectives, which is more important than ever before in today’s complex hiring environment.”

Han says that the proceeds will be put toward increasing San Francisco–based ModernLoop’s headcount from 12 to 25 by the end of the year, with a focus on making go-to-market hires in areas like sales and marketing.