Justt, a Tel Aviv-based chargeback mitigation startup, is emerging out of stealth today with $70 million in total funding.

Founded in February 2020 by Roenen Ben-Ami and Ofir Tahor, Justt says it fully automates chargeback disputes on behalf of online merchants. The startup recently raised $50 million a Series B round of funding led by Greenwich, Conn.-based Oak HC/FT. That built up on previous rounds, including a $15 million raise led by Zeev Ventures in February and a $5 million raise led by F2 Venture Capital in November 2020. Strategic individual investors in Justt include David Marcus, former PayPal president; Jacqueline Reses, former head of Square Capital; and Gokul Rajaram, a DoorDash executive.

Justt, which was previously known as AcroCharge, says its annual recurring revenue (ARR) is up 900% over September of 2020. Its headcount has climbed to over 110 employees, up from 3 a year ago. The company declined to reveal at what valuation its Series B was raised.

For the unacquainted, chargebacks are defined as demands by a credit card provider for a retailer to make good the loss on a fraudulent or disputed transaction. Just aims to help merchants globally fight false chargebacks with the artificial intelligence it has developed.

False chargebacks, also known as “friendly fraud,” occur when shoppers incorrectly dispute charges to their credit/debit card, resulting in their financial institution canceling their payments and merchants losing money. Justt’s AI-powered technology is designed to flag incorrect chargebacks, which typically represent at least 85% of disputes and result in over $125 billion in annual losses, the company says. It builds a system tailored to each merchant that integrates with their card processors, gathers evidence refuting illegitimate chargeback claims and submits the information to credit card companies on their behalf.

Ultimately, it aims to replace in-house mitigation programs for companies, which are mostly large enterprises such as fintech unicorn Melio and Wyre, a blockchain-based payment company. It handles over 10,000 chargebacks per month for some of its customers.

“The chargeback system is fundamentally unjust, but many merchants view their losses as simply the cost of doing business. At Justt, we believe there’s a better way, and that  e-commerce sellers need someone in their corner as they navigate this archaic system,” said CEO and co-founder Tahor. 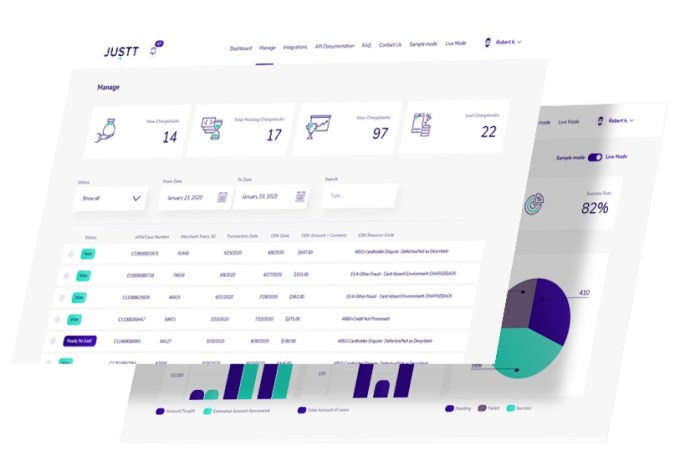 The executive believes that Justt is different from other companies in the space such as Chargehound, Chargeback.com and Midigator, in that those companies offer tech tools “but still require customers to maintain an in-house team with the relevant expertise to create templates and gather evidence.”

“These systems are dependent on customers’ teams to drive optimization and success rate improvements — they don’t offer a full-service solution like Justt,” he said.

Justt, he says, is different in that its research teams analyze merchants’ checkout processes, terms & conditions, confirmation emails, chargeback reason codes, among other things, to offer a more customized service.

The startup’s business model is designed to minimize risk for potential customers. It won’t charge them anything unless their funds are recovered.

“Our business model is based entirely on success. We don’t have any integration fees or per-case fees; we only succeed, and only charge a fee, if our merchants succeed and realize real-world savings due to reduced transaction fraud,” Tahor told TechCrunch.

Justt was founded during the pandemic, which led to a boom in online transactions and related surge of fraudulent chargeback activities.

“Since then, the demand for our solution has skyrocketed, driven both by the general growth of online businesses and transactions, and specific pressures such as economic pressures, supply-chain issues, delivery delays that are fueling an increase in fraudulent transaction reversals,” Tahor said.

The company plans to use its new capital to invest “heavily” in product development, sales and marketing, including expanding its sales and marketing operations overseas to the U.S. and Europe. It also expects to triple the size of its Israel-based R&D workforce in 2022.

“With this funding, we’re planning to expand into the North America market aggressively, including setting up our U.S. headquarters in New York City and preparing for our West Coast office opening,” Tahor said. “We will also invest in serving the European region in accordance with market opportunities.”

Justt helps re-capture 60% to 80% lost from illegitimate chargebacks that occur post-transaction, according to Matt Streisfeld, partner at Oak HC/FT.

“Most simply write off these losses – an unsustainable and expensive approach, and one that leaves Justt positioned for record adoption in the next 5 years as merchants seek new ways forward,” Streisfeld wrote via e-mail.