Gloat, an internal marketplace for corporate talent, today announced that it raised $90 million in a Series D round led by Generation Investment Management, bringing the startup’s total raised to $192 million. Generation, notably, is chaired by former U.S. Vice President Al Gore. In an email Q&A with TechCrunch, CEO Ben Reuveni said that the proceeds will be put toward expanding Gloat’s presence, growing its team of over 250 employees and “strengthening” its R&D initiatives.

The list of employee recruitment, acquisition and jobs boards products is practically endless — see Workday, LinkedIn and SAP SuccessFactors to start. Reuveni doesn’t deny that Gloat faces stiff competition, but he sums up what he believes to be the company’s differentiators thusly: “Gloat is unique in that we started by powering a solution for internal mobility. Across the market, there are a number of recruiting … tools to source external candidates, but internal mobility poses unique and nuanced challenges. It requires a real understanding of transferable skills and titles that may not be obvious without the deep, organization- and industry-specific insight Gloat’s technology was built to offer.”

Reuveni founded Gloat in 2015 alongside Amichai Schreiber and Danny Shteinberg. Reuveni was previously a solutions architect at IBM, while Schreiber came from Intel, Mobileye (prior to Intel’s acquisition) and HP.

“The traditional approach to work, jobs and careers, which has been at the heart of enterprise operations since the industrial revolution, is now holding businesses and their people back. In an age where the speed of change demands greater agility and adaptability than ever before and employee expectations have risen, enterprises need a more agile operating model for talent and careers — one that puts every employee at the helm of their own career development and gives businesses the data intelligence they need to make smarter talent decisions,” Reuveni said. 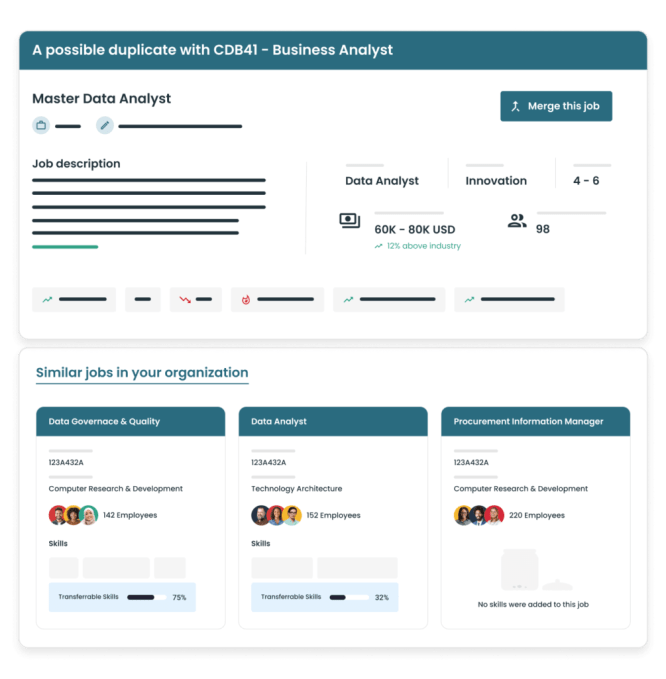 As my colleague Ingrid Lunden reported last year, Gloat sells an AI-powered platform to organizations to power their job boards. Integrated with existing software, Gloat sources information on employees to help match them to job openings at their employer — whether they’re proactively searching or a manager seeks them out. In cases where a worker falls short of requirements, the platform provides guidance on what they need to learn as well as part-time and shadowing opportunities.

Gloat uses an AI system to map the relationships between skills, roles, candidates and companies. Trained on CVs, professional profiles, job descriptions, academic content, economic data and compensation data, the system attempts to quantify the ways that job titles, job requirements and skill needs change, Reuveni said. Given the same job title can mean different things depending on the company; Gloat was designed to understand those nuances and automatically infer differences in roles across companies, geographies and industries.

“Using Gloat’s AI, every employee gets personalized career path options based on their unique skills and interests. And as job-specific requirements evolve and new roles emerge in an organization, the AI identifies these changes and adjusts its recommendations accordingly,” Reuveni said.

Gloat also captures the “aspirations” of employees, Reuveni says, informed by the skills they use most frequently and their professional development plans. In the best-case scenario, assuming Gloat’s data is accurate, this could provide a resource to management as they decide how to deploy talent.

Of course, no algorithm is unbiased. And in hiring, the impact can be severe. LinkedIn years ago discovered that the recommendation algorithms it uses to match job candidates with opportunities were referring more men than women for open roles. The algorithm ranked candidates partly on the basis of how likely they were to apply for a position or respond to a recruiter, and — as MIT Technology Review notes in its report on the bug — men are often more aggressive at seeking out new opportunities.

A blog post penned by Gloat HR analyst Adam Etzion dated February 2021 discusses an “anti-biased dataset” used by Gloat’s data science team, customizable to individual customers. And a whitepaper, published last April, details Gloat’s bias detection tools that can pick up on unwanted trends in AI-powered recommendations and introduce noise into the data to (in theory) mitigate them. 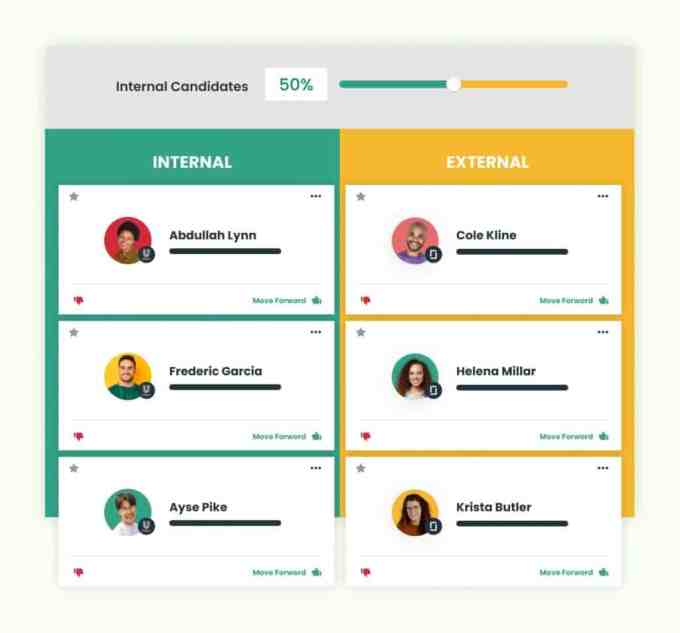 Reuveni didn’t directly respond to a question about bias in Gloat’s algorithms, but he expressed confidence in the system’s accuracy. “The resulting skill trends and recommendations delivered through our platform provide unparalleled workforce intelligence,” he said.

Hyperbolic as that might sound, Gloat’s customer list is expansive and includes brands like Mastercard, Unilever, Schneider Electric, Nestlé, Novartis, Standard Chartered Bank and HSBC. More than 1.1 million users in over 120 countries use the platform, Reuveni said, a number that’s grown during the pandemic as companies’ hiring decelerated and the focus turned toward upskilling their workforce.

“As external hiring looks poised to slow drastically again and businesses are eager to avoid repeating mistakes from the pandemic, Gloat’s customers have become beacons for the future of work movement. This has positioned Gloat extremely well to weather economic headwinds and ride the momentum of tailwind,” Reuveni said.

How engaged are your employees?

Gloat is also benefitting from a general rise in VC funding for HR tech startups. In January, VCs funneled more than $1.4 billion into HR tech, according to PitchBook data, building on a record year — 2021 — that saw over $12.3 in venture capital invested in HR tech across more than 800 deals.