A popular anonymous social app called NGL has now topped 15 million global installs, according to new data from app intelligence firm Sensor Tower, released today. The app, which is now one of a handful of unregulated and potentially problematic anonymous apps targeting teens, has been swiftly climbing the charts since its December 2021 launch. But while NGL is now sitting in the top 10 in the U.S. App Store, much of its current growth is being driven by Android users in markets like India and Indonesia, Sensor Tower’s data indicates.

Emerging markets can help push new apps like NGL up the charts, where they gain even more attention from consumers. But in the case of NGL and others, there are reasons to be concerned about its rapid adoption. The app and some of its rivals have been accused of using bots to drive user engagement.

This is an issue because the app promises “anonymous” social interactions in the form of Q&A’s from online friends and then monetizes by offering “hints” as to who sent you those messages, which has allowed it to pull in millions. In other words, both the App Store and Google Play as well as the app developer itself appear to be profiting from an illegitimate operation that tricks people into thinking their friends are asking questions, when some of the questions are actually automated.

When TechCrunch recently tested NGL and its rival Sendit, we copied the provided short links into an Instagram Story that was only live for a mere moment before we took it down. This tricked the apps into thinking we were now awaiting anonymous questions from our friends. A few hours later, questions — supposedly from our friends who saw our link — appeared in the apps’ respective inboxes. But in reality, no one had seen our link as it was never live long enough to be clicked by anyone, much less half by the half dozen people who supposedly send us messages, according to NGL.

It seems pretty clear from these tests NGL is attempting to mislead users — and its low-ranked app store reviews are filled with complaints about its usage of bots.

Keyword analysis for the U.S. finds reviews referencing words like “bot” or “bots,” “fake messages,” “fake questions,” “scam,” and other terms about the app’s tricks or how the user “wasted” ten dollars to get hints about who had asked the questions. The app’s five-star reviews, meanwhile, come across as fairly suspect as many repeat the same phrase: “very good.” 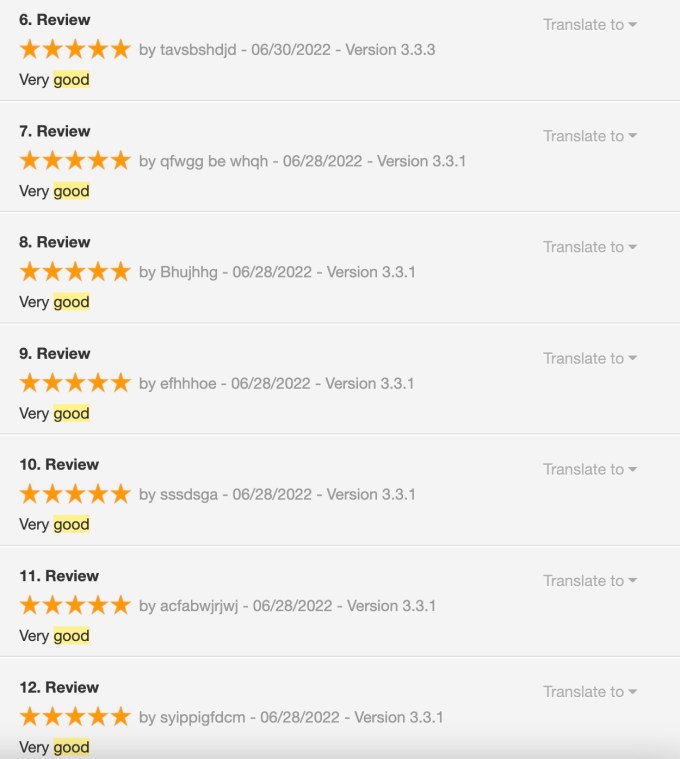 NGL charges users $9.99 per week for a subscription providing unlimited hints as to who sent the questions you receive. The hints aren’t useful, either, users said in the reviews, as they only offer broad details like location and device model. To date, Sensor Tower says NGL’s users have spent around $2.4 million in the app. The $9.99 unlimited hints subscription was the top in-app purchase, followed by the $1.99 per week unlimited hints option, the firm noted.

Despite these issues, the app continues to gain traction. NGL’s Google Play installs now outpace its App Store installs, with the app seeing some 6.5 million Android downloads in June compared with 4.4 million for iOS.

Indonesia is NGL’s largest market to date, accounting for approximately a fifth of NGL’s lifetime installs or about 3.1 million installs, 83% of which are from Google Play, Sensor Tower says. The U.S. is the app’s second-largest market by installs, representing nearly a fifth of its lifetime installs, or about 3 million installs. India represents about 10% of total installs with about 1.5 million.

So far this month, NGL’s growth trends have continued with the app pulling in another 4.6 million installs as of July 10 (2.7 million installs on Android and 1.9 million on iOS.) That’s up 107x from the 43,000 installs the app saw. during the first 10 days of June, but it’s down by 41% when compared with the prior 10-day period (June 21-30), when the app saw 7.8 million installs. This indicates adoption levels may be somewhat normalizing since the surge in late June, but the app is continuing to grow steadily for the time being.

It’s not clear why the app stores have not taken action against this app and its rivals, given how trivially easy it was to trick this app and competitors into sending us fake questions. At the very least, when an app reaches the top of the app store, it begs for a closer inspection.

NGL has not commented on the new data or users’ complaints at this time.